A record-breaking performance by the UK at the International Olympiad in Informatics, held this year at the Olympic village in Athens, has seen the team win not only the top gold overall in the competition, but also two silver medals. The top prize was won by Paul Jefferys, who shot to fame last month by taking a record 10 A-levels. The team was selected in the annual British Informatics Olympiad, which is sponsored by Lionhead Studios, the UK's leading videogames developer.

A few weeks after the Olympic games, another UK team has broken all records to win the top gold, and two silver medals, at the International Olympiad in Informatics. Held from 11-18 September at the Olympic village in Athens, this prestigious competition is held annually in different countries, and was set up in 1989 by the UN.

The team was selected in the 2004 British Informatics Olympiad, a competition open to all schools and colleges around Britain. Students from about 150 schools took a 3 hour paper in which they helped answer questions about the Mayan calendar, programmed a computer to play a game, and deciphered messages in the Morse Code. The top 15 reached the final, held from 26-28 March at Trinity College in Cambridge, where their capabilities were really stretched with written problems on mapping a secret complex, tossing coins, and training homing pigeons to find the fastest route home.

The top four formed the British team for 2004. Accompanied by two team leaders, they have been representing Britain at the 16th International Olympiad in Informatics (IOI) in Athens.

The final results from the IOI are:

Paul Jefferys' performance at winning the top overall gold is the UK's best ever, beating 300 top students from 75 other countries. Paul has been in the news and on TV several times over the last couple of years, most recently when he achieved a record-breaking 10 A-level grade As this summer, with an average mark of 95%.

The other BIO finalists were:

Tim Rance, a director of Lionhead, said "We were very impressed with the extremely high standard of the all competitors and feel that a very strong team has been selected for the internation final. Lionhead is proud to be able to sponsor the BIO team and promote the excellence that exists at school level within the British computing fraternity." 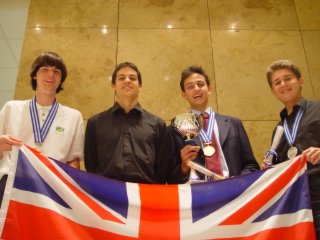 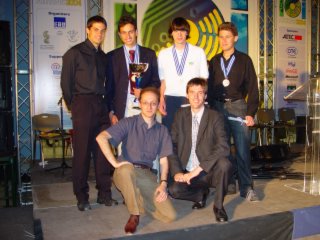 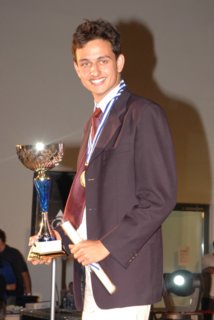 More information on the BIO may be obtained from:

Copyright-free photographs of the team and finalists are available from the Chairman.

The BIO publishes a large amount of information on the Internet. For details of the BIO and related material, take a look at the BIO Index.

If you are publishing a link to the BIO website, please use the location http://www.olympiad.org.uk/

The British Informatics Olympiad (BIO) is an annual competition in computer programming for students at secondary schools and sixth form/FE colleges. Any student who is under 19, in full time pre-university education and resident in mainland Britain, is eligible to take part and may win the prize of an expenses-paid trip to the prestigious International Olympiad in Informatics (IOI).

The first stage of the BIO is a three-hour exam, taken at school, in which students solve problems with the aid of a computer. These are marked by a teacher and submitted for moderation. Based on the results of this exam, the top 15-20 competitors are invited to the BIO final in Cambridge, over the Easter holiday. The best four make up the team to represent Britain at the IOI.

The BIO is a non-profit making organisation founded in 1995, aiming to encourage students to take an active interest in information technology, to allow them to meet and exchange ideas, and to give the best the chance to compete at the annual International Olympiad in Informatics.

In order to make the BIO as inclusive as possible, it is free to enter. This can only be achieved thanks to the aid of commercial sponsorship. The 2004 British Informatics Olympiad is sponsored by Lionhead Studios, who are widely regarded as the leading videogames developer in the UK, in an industry where the UK leads the world. The company's first game, Black & White, won many awards including 2 BAFTAs and topped the charts with a concept that changed gaming forever. Lionhead and its three satellite developers are currently creating a new generation of innovative videogames for all the major platforms.