If you have participated in previous years you should take careful note of the new dates for this year's content. 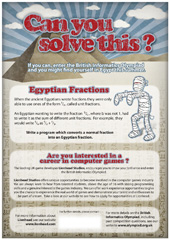 BIO 2008 took place November - December 2007 and March 2008. The competition was open to all students in full-time pre-university education in mainland Britain, and involved solving problems against the clock, using nothing more than pen, paper and a computer.

The BIO consists of three stages. The first is a 3-hour test, the British Informatics Olympiad, which took place in schools during November-December 2007. This involved solving a range of problems using a computer. The second stage is the final, held in Cambridge from 28-30 March 2008. The top four finalists will make up the team to travel to the 2008 International Olympiad in Informatics, hosted by Egypt.

As well as the possibility of winning a medal - our competitors won over twenty in the last ten years, including four golds - the team will enjoy VIP treatment and get to socialise with contestants from over 75 different countries that will take part.

30 March 2008 The following students were selected to represent Great Britain at the 2008 International Olympiad in Informatics:

This year's reserve team member is: The other finalists were:

See the links below for information about BIO 2008.